PSC cements position as one of UK’s top sporting colleges 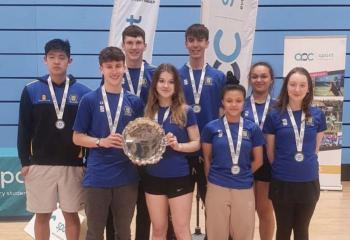 Following on from an incredible set of successes at the Association of Colleges (AoC) National Championships at the end of April, students from the College's Men’s Hockey, Mixed Hockey, Badminton and Women’s Volleyball teams are celebrating fantastic results in the recent AoC National Cup Finals.

The Men’s Hockey Team beat Greenhead 2 – 0 to win the cup, a victory made all the more impressive as a result of the team playing with ten men, three of whom who hadn’t played for the team before as a number of regular players had to miss the match due to exams taking place at the same time.

The Mixed Hockey Team beat Godalming 5 – 4 to win their final and the Badminton squad beat Farnborough 9 – 1 to lift the shield as Champions.

At the end of a thrilling and hard-fought game the Women’s Volleyball team came runners up to Newcastle, taking home silver medals.

Theo Beech, Player of the Match in the Mixed Hockey Cup Final, summed up the experience, saying, “The team has fought hard all season to get to the final stages of the National Cup tournament. I loved the camaraderie of the team and how we worked together to really get through the tough final hurdle. We all wanted to win and we knew we would all give 100% to win. Everyone was excited and positive even in times where the game wasn't going in our favour, which says a lot about both the character and skill of the squad.”

The teams from Symonds reached the National Cup Finals after a gruelling qualifying campaign, playing a number of games over the course of the academic season to reach the finals. The Men’s Hockey, Mixed Hockey and Badminton finals took place at Birmingham University’s facilities while Women’s Volleyball played at Wolverhampton University.

Bethryn Keysell-Fitzpatrick, Badminton Player of the Match, said, “I enjoyed being able to travel and compete with my team, being able to support each other and the opportunity to meet and build bonds with other teams. Events like this are extremely important for exposure to sport and give a platform to young, up-and-coming sportsmen and women, especially after the setbacks caused by the pandemic.”

She continued, “Participation in sport in schools and colleges is vital and I would encourage anyone to join a club or team as there are so many health and social benefits, even just once a week.”

Theo agreed, adding, “These events are invaluable, as an escape from stress, and like all other team sports hockey is very social, which helps build friendships and creates a positive environment to perform well in. As an experience as a whole the final re-enforced the importance of attitude, never giving up and inspiring everyone in the team by leading by example. Tournaments involving a wide range of colleges are great for the sport and for all the colleges involved. They spark a competitive atmosphere and it’s great to play a variety of different colleges, travelling around the country and wanting to win!”

Sam Jones, Head of Enrichment (Sports Teams) and Sports Co Ordinator at PSC, said, “It was great to have four teams qualify for National Cup Finals this season, especially after the competition being cancelled for the past two seasons due to Covid 19. It is a huge achievement to walk away from four finals with three winners. It's a real credit to the students and coaches.”

Sam concluded, “We have a real breadth and depth of sporting talent at Peter Symonds, both among the students and the coaching staff, and it’s immensely rewarding to see it recognised at a national level.”

Click on the link below to find out more about recent sporting successes in the AoC Championships and Women's Rugby.