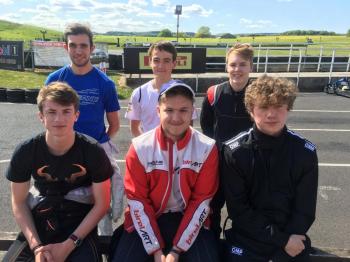 Six Peter Symonds College students have won a place in the National Final of the British Schools Karting Championship (BSKC) 2019. They will compete against the best school and college teams in the country at Whilton Mill in Northamptonshire on Saturday 29 June, just two weeks prior to the British Grand Prix Formula 1 race at nearby Silverstone.

Sam Pooley, 18, Dom Cousins, 18, Tom Hastie, 17, (L-R Back row in the attached photo) James Brook, 17, Seb Algieri, 17, and Aaron Farmer, 17, (L-R in the front row of photo) who are all students from Peter Symonds College, earned their place in the National Final by achieving First and Fifth place in the South and South West Regional Final of the UK’s largest school karting competition, which took place at Thruxton on Sunday 12 May 2019.

Kitty Yarwood, College Sport Maker from Peter Symonds College, said “This is the second time we have had both teams at Regionals qualify for Nationals and we are very excited about this! This will however, be the first time both compete as last year some of the racers from the B Team had clashes on the Final date last year. For the second year in a row, Tom, Sam and Dom who make up the A Team, have won the Regional Final. Last year at Nationals they came Third. We are very much hoping they reach the podium again and are aiming to try and win the competition.”

For details of the National Final or more information on the BSKC, visit www.bskc.co.uk.